Centregreat was appointed as the main contractor for Phase 1 of the NPTCBC Renewal Contract in 2010. The project entailed the replacement of time expired public lighting horizontal and hi lift wood pole infrastructure and replacement and erection of other public lighting infrastructure. We worked closely with the Council’s Engineers and staff and successfully proceeded to the completion of the Contract.

Centregreat was subsequently appointed as the main contractor for Phase 2 (2011) and 3 (2014) of the Renewal Contract.

In September 2016 Centregreat was appointed as Principle Contractor for the replacement of LED Street Lighting on the Strategic Highway Routes Contract for Cardiff City Council. Our programme has enabled us to deliver the contract in a period of 9 months, more than a year sooner than the original completion date which has offered the Council significant savings.

The works involve the installation of 12,500 LED lanterns on major routes throughout the City of Cardiff, all of which have Philips CityTouch System allowing the authority full control of the lanterns. We are also installing CMS equipment on any existing LED lanterns to ensure the City has full control of its LED lighting stock, allowing custom lighting and dimming schemes all over the City.

Residents in Llanddarog, Carmarthenshire have seen the light; the busy A48 junction is benefitting from the latest white light technology following the replacement of the old-style lanterns by Centregreat.

South Wales Trunk Road Agency (SWTRA) are agents to the Welsh Assembly Government (WAG) for this section of the busy A48 trunk road. The old lighting was low pressure sodium on steel columns in the central reserve, the new scheme was designed using high pressure sodium, a whiter light, along with passively safe aluminium columns and installed in the verges.

Imperial Shopping Park is a dominant out of town shopping destination for south east Bristol, two miles south of the city centre, with 20 stores including Argos Extra, B&Q, Next, Costa Coffee, Pizza Hut and Subway, plus a free 1,200 space car park.

Centregreat Scotland have been installing Parkeon equipment for over 3 years, providing the necessary civils, electrical connections and safety barriers for the Pay on Foot parking meters, to date we have installed over 400 units across Scotland and the North of England

Cardiff Council is the first Council in Europe to roll out this technology across its citywide road network. Populated with data collected through the sensors, drivers in Cardiff can download an app, called ‘Park Cardiff’, to search and view a real-time map of parking availability and be directed to an empty space; reducing the time and subsequent congestion caused by searching for a parking space. 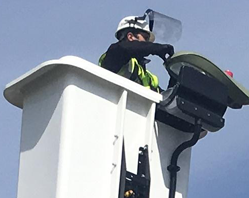